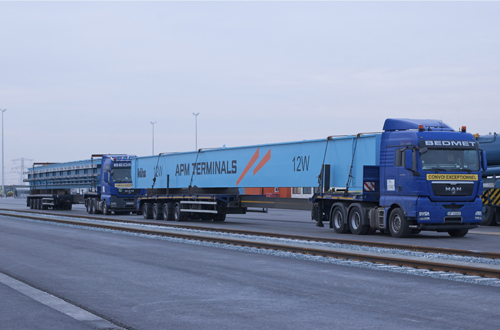 The first two of a total of 26 automated rail-mounted gantry cranes (ARMGs) have been delivered to the APM Terminals new Maasvlakte II terminal site.

The first part of civil construction has been completed paving the way for the installation of the ultra-modern, highly automated equipment.

The ARMGs, along with two additional rail cranes, are being supplied by Austrian-based manufacturer Hans Kuenz GmbH. The 30-meter wide ARMGs will use a fully automated system to load and unload containers onto and off of truck chassis and onto a fleet of 37 battery-powered Lift Automated Guided Vehicles (Lift AGVs) also on order with the first deliveries expected in June. The rail cranes will be used at the facility’s on-dock rail terminal.

“Thorough testing of automated equipment and IT is core to our plans to deliver the terminal of the future,” stated APM Terminals Maasvlakte II Managing Director Frank Tazelaar, adding “This on time delivery of the first ARMGs enables us to start testing as per plan”.

The APM Terminals Maasvlakte II facility, scheduled to open in November 2014 with an initial annual throughput capacity of 2.7 million TEUs, will be the most technologically advanced container terminal in the world, and will be capable of handling the world’s largest containerships with 1000 meters of quay and a 20-meter depth. Supporting the existing APM Terminals Rotterdam terminal, one of the largest in Europe, handling 2.49 million TEUs in 2012, the new terminal’s on-dock rail terminal will initially include four tracks, expanding to eight tracks at full build-out with a direct connection to the Betuwe rail line, a 160 km (100 mile) dedicated double track electric-powered freight line which links the Port of Rotterdam with the German border at Zevenaar-Emmerich.