CONTAINER carriers have more than doubled rates on the Asia to northern Europe trade and successfully increased prices on other trades as a result of July’s general increases.

The latest figures from the Shanghai Containerised Freight Index show that the all-in spot rate for moving a box from Asia to Europe increased 174%, or $895, week on week to $1,409 per teu.

It is the highest level that rates on the trade lane have been since mid-March, when carriers last successfully implemented a general rate increase.

However, it lags behind last year’s level for the end of June, when prices from Asia to Europe reached almost $1,900 per teu.

Also, Rotterdam HS380 bunker prices are currently slightly higher than they were this time last year.

Shipping lines also had success on other trade lanes. On services from Asia to the US west coast, prices increased by $269 compared with last week to reach $2,114 per feu. 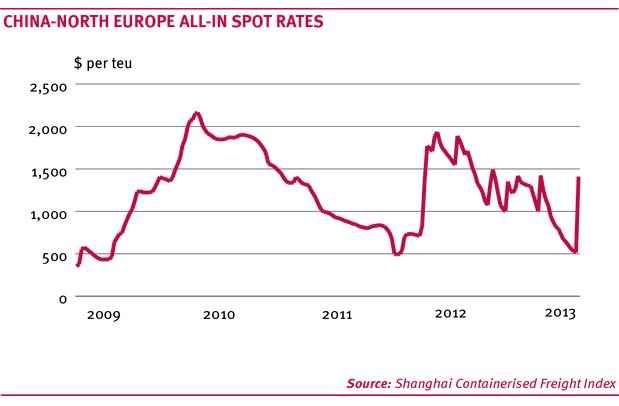 The rates are also lower than the figures recorded at the same point last year, when prices to the west coast stood at $2,571 per feu and prices to the east coast were at $3,762.

On services from Asia to Mediterranean, all-in spot rates increased $220 week on week to $1,386 per teu.

Attention will now turn to how long carriers can sustain the Asia-north Europe rate increase. The last GRI on the Asia to Europe trade, in March, was wiped out within four weeks.