Samples of ice or ices cores, each slightly longer and wider than a baseball bat are regularly drilled from the sea ice of Antarctica. The cores are like gold in scientific value – each containing a multitude of microorganisms (algae, bacteria and viruses), which global warming studies have found might serve as an efficient regulator of excess carbon dioxide in the atmosphere.

Earlier this year, Maersk Line was presented with the unusual task of shipping a load of these ice cores all the way from Antarctica to Europe. This challenge turned into a challenging frozen torch relay across the oceans, where our employees made big strides to ensure that the cold chain was not broken during the long journey.

From Antarctica to Europe
The first leg of a long voyage began this February at the Scott Base in Antarctica. The ice was packed into a standard 20’ reefer container and loaded onboard a chartered supply vessel taking it to the port of Lyttelton in New Zealand.

To maintain a constant temperature of -30°C throughout the 42 day transit time from New Zealand to Europe, the cargo was repacked into a 40’ Magnum reefer container. And then it was off to the next stopover of Tanjung Pelepas, Malaysia.

After covering another 5,000 nautical miles onboard the ‘Maersk Seoul’, the ice cores finally reached the port of Antwerp on 24 April.

“Our hearts were racing”
All that was left now was to deliver the frozen goods to a group of very excited scientists in Brussels.

Professor Jean-Louis Tison of the Université Libre de Bruxelles is head of the science team, who spent weeks drilling the ice cores near the Scott Base. Now present at the university’s cold store facility for the final unpacking, he admits:

“Our hearts were racing when we opened the first pallet to see if the ice had travelled safely and kept intact the wealth of biological and scientific information we need for our studies. We needn’t have worried as we found the cores in absolute pristine condition, with not a droplet of potential melting or any broken parts.”

Needless to say, we were immensely proud of this achievement. 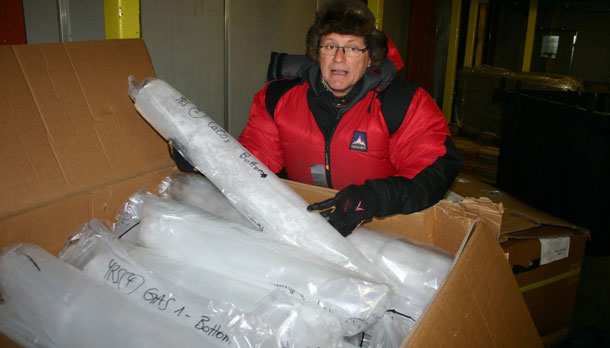