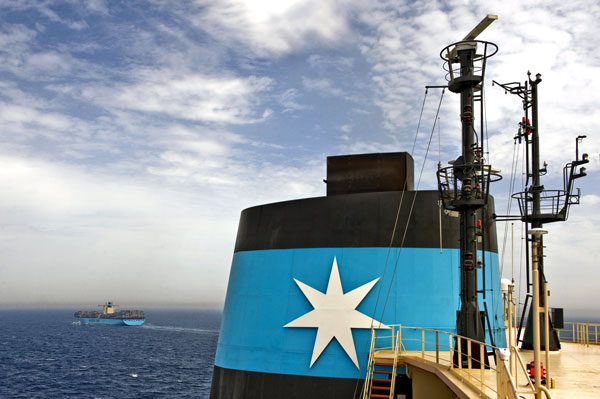 The improved performance took the Danish carrier’s nine month net income to $1.2 billion, against $126 million in the same period in 2012.

The global container market showed “encouraging” growth of around 5 percent in the third quarter, compared with a year ago, showing “early indications of demand picking up,” according to A.P. Moller-Maersk, parent of the world’s largest ocean carrier.

Maersk slashed unit costs by 13 percent to $2,622 per 40-foot container during the quarter, from $3,012 last year, mainly through vessel network efficiencies and improved vessel utilization, as well as an 8 percent reduction in fuel consumption and a 17 percent drop in bunker prices. Traffic grew 10.6 percent to 4.6 million 20-foot-equivalent units, from 4.2 million TEUs, which largely offset the 12.2 percent decline in average freight rates to $2,654 per 40-foot container and saw revenue dip just 2.6 percent to $6.78 billion. The carrier achieved a 10.9 percent net return on capital during the quarter.

The seasonally lower fourth quarter started with low freight rates, which will lead to a “significantly” lower result than in the preceding three months, Maersk said, but it expects the full-year result to be “significantly “above the $461 million profit it made in 2012. Maersk cautioned, however, that “weak marco-economic development continues to keep demand for container transports low.”

The next two years will be “relatively unfavorable” for container shipping, said Nils Andersen, CEO of A.P. Moller-Maersk. Maersk Line’s improved result helped its parent, which is also active in oil exploration and drilling, tankers and container terminals, to grow third quarter profit to $1.2 billion from $933 million a year earlier.