Ever since Mark Q was introduced, the design has constantly evolved to optimise cargo care and minimise repair cost.

Earlier, there were a multitude of different reefer container designs. Each owner had his own specification. Sometimes, the differences between designs were down to minor details. Sometimes, it would entail a totally different design. As a result, the container manufacturing industry used to resemble workshops rather than a high-tech modern mass-production facility.

In 2008, after analysing M&R data and following extensive consultations with customers, MCI came up with the Mark Q reefer container. Mark Q was intended to be a better and cost-effective reefer container that met the following requirements:

The lowest Cost of Total Ownership (TCO) A rugged reefer, resistant to impact and cost-effective to repair. Not just focusing on the initial cost when buying a new container, but also on the M&R costs during the entire working life of a reefer.

A reefer container for optimal cargo care. To focus on the exporters’ needs, including insulation and hygiene.

Mark Q did not spell the end of some customised designs, but it became the platform from which customers’ designs could develop. Much like car manufacturers now have a common platform used to make different makes and models of cars. Mark Q is therefore still MCI’s reefer container platform today. When MCI in San
Antonio, Chile comes on stream in 2014, the platform will also be Mark Q.

The Mark Q concept was a success from the start, as customer involvement in the design phase helped bring acceptance across the industry. The success was such that MCI changed to the Mark Q for 100% orders faster than even the most optimistic projections. To date, MCI has produced more than 180,000 Mark Q containers.

Mark Q was never intended to be a final design, and over the years it has evolved – it is a “living design”; optimised through constant dialogue with customers regarding design improvements. One focus is always to optimise the design to lower M&R costs. In recent years, the focus has also been on optimising interior space to make it the least bacteria-prone container in the industry.

Mark Q construction is based on detailed repair statistics 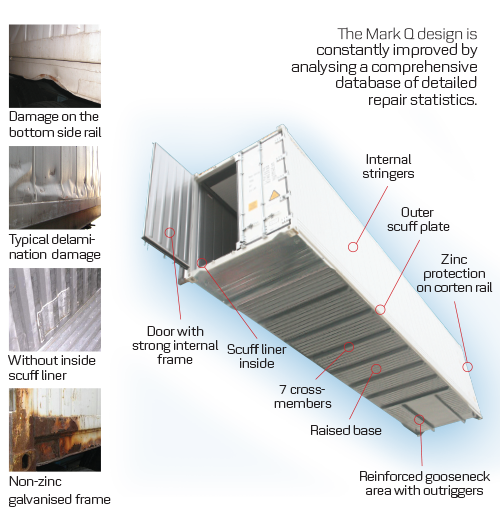 A key component in the development process is MCI’s access to a comprehensive database of detailed repair statistics.

MCI continuously analyses repair statistics to better understand typical damage patterns and areas that are particularly prone to damage. This is very valuable for the development process, as it shows where it is necessary to redesign, add or remove material or change gauges to improve the box without adding tare weight or reducing insulation values.