Bundle calls to save money: that’s the basic idea behind the Barge Service Center. Since August 2014, the Kramer Group’s Rotterdam Container Terminal (RCT) on Maasvlakte has served as a new location to divert inland vessels to for minor calls. This raises productivity at the deepsea terminals, minimizes the need for barge operators to hop along multiple terminals and shortens container transit times. 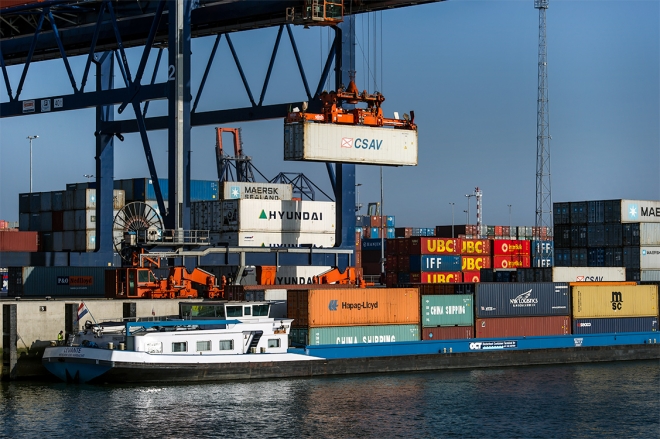 Kramer Group CEO André Kramer had been considering the idea of setting up a barge service centre at the Rotterdam Container Terminal (RCT) for over five years. Inland vessels could call at such a facility to unload small call sizes, after which the export containers could be transported by truck to the different deepsea terminals. Since August of last year, RCT has been handling the necessary calls on ECT’s behalf, and the Barge Service Center is a fact. “Over the past months, we have unloaded some 60,000 to 70,000 containers for ECT,” says Kramer.

“With the opening of the new terminals on Maasvlakte 2 the port of Rotterdam now has five deepsea terminals. As a consequence, inland vessels will be required to load and unload at a growing number of terminals. This hopping between terminals needlessly extends the time inland vessels spend on their itineraries in the Rotterdam port – particularly when connections between calls are sub-optimum. This costs barge operators a lot of time and money.

In addition, terminals are increasingly used for smaller calls. The time spent on docking an inland vessel in order to unload a few dozen containers does not promote efficiency. The terminal operator’s quays and the infrastructure are not put to optimum use, resulting in low productivity and higher costs per container.

In other words, both barge operators and terminals stand to gain from the bundling of small call sizes at a central location in the port area. One of our advantages is that we are a neutral party: we compete with neither the inland shipping companies nor the terminal operators. In addition, the RCT is very well-situated for this facility, and the required infrastructure is already in place.

I believe that the BSC will prove a successful venture, and the fact that all three deepsea terminal operators recognise the advantages of a barge service centre serves as further proof. Right now, the terminal operators determine on an individual basis which inland vessels unload at our facility. But in the future, I expect that it will become standard procedure to direct small call sizes to the BSC. The increase in efficiency will ultimately benefit the port of Rotterdam as a whole.”