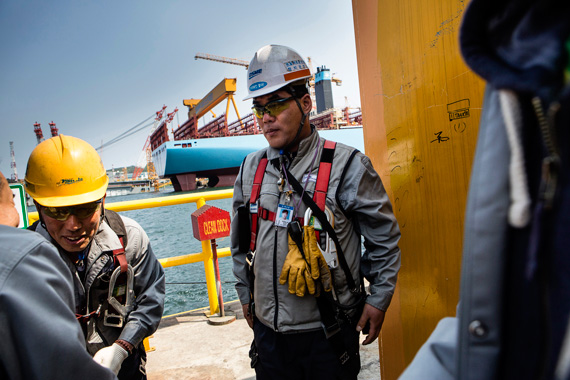 Its new order calls for an initial six 20,000 20-foot-equivalent-unit ships with options for a further four vessels being attached to the contract. Booked for delivery during 2017, they are understood to have been priced at US$155 million per vessel. Both Hyundai HI and Samsung were also believed to be in the offing for this hotly contested contract.

The latest order follows similar moves made by Maersk’s rivals CMA CGM, MOL and OOCL in ordering vessels of 20,000-TEU capacity this year.

The new Maersk order represents repeat business for DSME, with the yard having won a well-publicized contract for 20 18,270-TEU Triple E-class container ships in 2011. The final three ships from the order are scheduled to be delivered to Maersk within the next two months. DSME has also built previous series of ships for Maersk comprising 16 7,500-TEU ships and four 8,000-TEU vessels that were delivered between 2007 and 2013. DSME is currently building a drilling rig for the associated Maersk Drilling.

According to IHS Maritime and Trade newbuilding data, Maersk currently has a further seven container ships in its orderbook, a design of 3,600-TEU vessels ordered in March this year at Cosco Zhoushan in China. Scheduled to be delivered in 2017, they would operate in Maersk’s feeder services in the Baltic Sea.

There are other ocean carriers understood to be in the market for 20,000-TEU-plus container ships, including Cosco, Mediterranean Shipping Co. and Yang Ming Line.

MSC, Maersk’s 50:50 partner in the new 2M Alliance, is expected to order an initial four such vessels that are likely to be contracted at Hyundai HI in the near future. Meanwhile, Cosco and Yang Ming, both members of the CKYHE Alliance, are expected to place orders for up to 11 ships each.