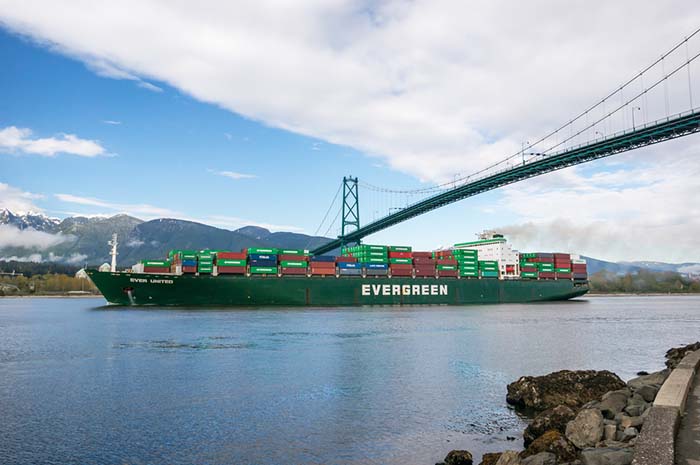 Revenues of Evergreen Marine, Yang Ming and Wan Hai are steady in the first and second quarters then drop sharply from July through September.

That is a trend followed by other major carriers. Even Maersk Line, the most profitable company in the business, saw its net operating profit sink by 60 percent in the third quarter as average freight rates fell 19 percent. Zim has just reported third quarter revenues down 12 percent as average freight rates fell 13 percent in the period year-over-year.

But it was in the areas of the freight rates, revenue and volume that the lines were hammered during the July through September period. This can be seen in the operating profits of the carriers that were dragged down by falling average freight rates that not even record low oil prices could offset.

Evergreen’s revenue tumbled 12 percent compared to the third quarter of last year, and even though container volumes grew 2 percent to 1.165 million 20-foot-equivalent units, it was nowhere near enough to correct a decline in average freight rates of 18 percent.

At Yang Ming, the situation was even worse. Revenue was down during the third quarter, and so were volumes, which fell 3 percent year-over-year. On top of the drop in liftings, average freight rates plummeted 20 percent in the three months compared to the third quarter of 2014.

Wan Hai was in profit by the end of the third quarter because of “exceptional income items” but among the Taiwan carriers, it was hit the hardest by rate reductions. Container volumes were up 4 percent to 883,889 TEUs in the third quarter, but average freight rates fell 24 percent during the period. Solid volume growth in its key intra-Asia routes in the first half has dropped off, which doesn’t bode well for the fourth quarter.

Moody’s expects Wan Hai’s revenue to decline by 3 percent this year and will likely be flat in 2016, writing in a statement that this will be driven by lower freight rates amid a challenging operating environment with industry overcapacity and weak demand.

Spot rates on Asia-Europe last week fell 28 percent to $295 per TEU, 63.5 percent lower than during the same week last year because excessive amounts of surplus capacity on the trade outpaced demand. There is not one week this year when spot rates have come close to matching those of the same week in 2014.

As the container shipping industry prepares for a gloomy end to the year, carrier executives will reflect on whether they should have significantly increased the number of vessels withdrawn from service earlier in the year rather than waiting until the second half.

According to Alphaliner, the idle container ship fleet increased sharply in November, reaching a five-year high of 1.24 million TEUs. It is 280,000 TEUs away from the record high of 1.52 million TEUs registered in December 2009.

Of the idle fleet, 40 units are between 7,900-18,300 TEUs, but Alphaliner pointed out that they are mostly idle because of void sailings and withdrawals by the alliances on the Asia-Europe trade and will rotate back into service within two to five months.

With Asia-Europe demand expected to remain weak while the trans-Pacific routes enter their traditional slack period, the number of idle ships is expected to increase in the coming weeks, the analyst predicted.

Alphaliner said the gloomy environment would also trigger more long term lay-ups, as seen last week when two panamax container ships headed for lay-up in the Philippines where they will join five 5,300-5,900 TEU units already anchored in the area.